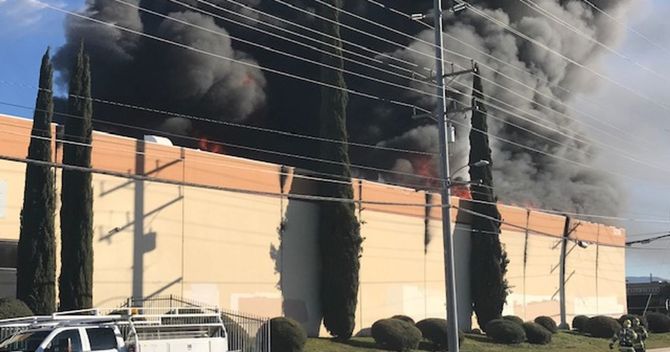 One morning last week just after 8 a.m., as Sarabjeet Ubbu was starting the day behind the counter of his 7 Star Food Store in Banning, Calif., he noticed black smoke billowing from the roof of the building across the street.

The unassuming beige facility houses Apollo Masters. Owners of a manufacturing plant and a closely held formula for making and mounting a specific mix of lacquer onto aluminum discs, the company supplies a reported 75% of the world’s blank lacquers, the shiny circular plates essential for the production of vinyl records.

The vinyl sector is a small but vital part of the music industry. Though it was impossible to know from where Ubbu stood, the smoke pouring from the windowless plant signaled a kind of doomsday scenario. The business of selling vinyl albums, in the midst of an unexpected 14-year surge in sales, could have been facing its biggest existential threat since the rise of the compact disc.

Ubbu stepped outside to call 911, but a police car had already arrived. So he started recording video on his phone. Eventually he retreated into his car on the far side of his property.

Soon, he says “five or six explosions” shook the neighborhood as flames shot up and smoke blew across the I-10 a few hundred yards north. Clumps of a black substance he described as tar rained down. “I said, my God, I’ve got propane gas here.” The tanks didn’t blow up.

Luckily, no one was injured in the three-alarm inferno, and within a few hours firefighters had extinguished it. By then, the Apollo facility was little more than a shell. 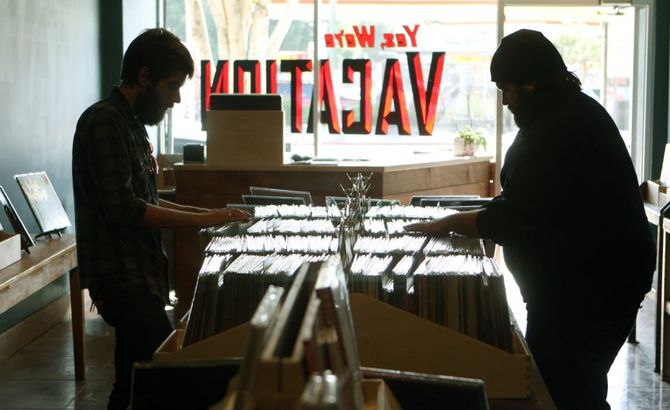 While April’s Record Store Day, the annual celebration of music retailers and vinyl, will be unaffected by the Apollo fire, the 2021 version could be impacted.

Ubbu spent the next morning removing black goop from the 7 Star parking lot. At some point a few people he knew to be Apollo employees stopped by to watch, but when he asked if they’d been in the plant, they told him they’d been recently laid off. News of the fire quickly spread throughout the close-knit vinyl production community.

“It sucks, man,” says Rick Hashimoto, plant manager at Record Technology Inc., a Camarillo-based record pressing plant. Even before the explosions, Hashimoto says, many had concerns about Apollo’s dominance. “It’s something that everybody in the industry has talked about: ‘What if something happens to Apollo? What if they go under?’”

He adds, “But I don’t think anybody ever actually said, ‘What if they have a fire?’”

How did one Southern California company end up monopolizing the global market for blank lacquer discs? What happens now that it’s out of commission? From an environmental perspective, can such a facility even exist in California anymore?

“This is not something that’s going to be easily handled, emotionally, financially, aesthetically, artistically,” says Len Horowitz, audio engineer and owner of History of Recorded Sound, a Culver City studio devoted to restoring and preserving recording and audio technologies. “It’s a billion-dollar industry. [Apollo] has tentacles everywhere.” The only other lacquer maker in the world, MDC in Japan, is operating at peak production and isn’t taking on new clients.

The demand for a rebuild is there. In 2019, U.S. vinyl sales grew by 14.5%, part of a decade-plus uptick, for a total 18.8-million records. Still, vinyl accounted for just 4% of all U.S. music sales, compared with 82% for streaming and the remaining 14% for digital downloads and CD purchases.

Horowitz, who as part of his 50-year involvement in the recording technology business has served as a consultant for Apollo, says the money’s out there too: “You could start a GoFundMe page right now and raise a million dollars from this industry,” he says, “and they’ll put that plant back in that building as fast as you think. Nobody would hesitate to throw money at it.”

The question? “Does Apollo want to?” 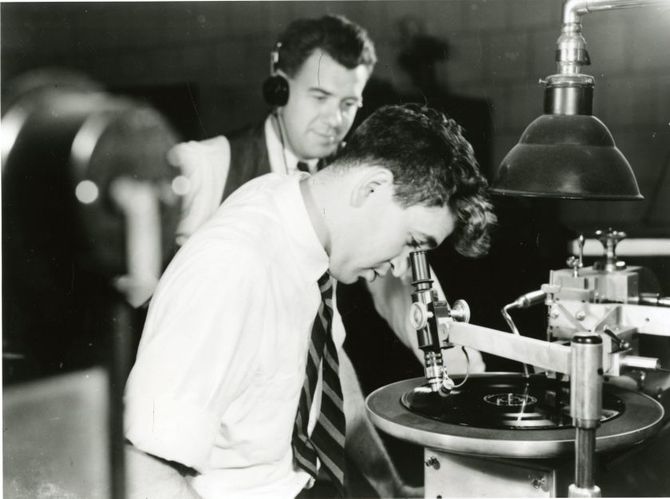 A sound engineer cuts sound waves onto a record lacquer.

Founded in New York in the mid-1930s as Apollo Disc, over the years the company devised and perfected its own process for making blank discs. During the 1960s and ’70s vinyl boom times, it was owned by Capitol Records.

After the rise of compact discs in the late ’80s, Capitol sold Apollo to GC International, a Camarillo-based precision parts foundry and manufacturer. The company’s owner, Terry Carlson, whose father founded the company, did not reply to requests for comment.

Other than a general statement posted to Apollo’s website, the company has remained mum. But that can’t last forever, Horowitz says. “They’re going to have to talk to us at some point or another.”

Until last week, only the most devoted audiophiles appreciated Apollo’s place in the vinyl supply chain. Unlike uploading a newly recorded project to a streaming service such as Spotify, manufacturing records relies on techniques, processes and machines honed over the decades.

The whole thing is best understood via a mess of metaphors. In filmmaking terms, a blank lacquer is the original negative. It’s the fresh cement into which you carve your initials. Made with what Horowitz describes as “the purest of absolutely flat aluminum, ultrasonically cleaned and prepared,” the disc is then coated, like icing onto a doughnut, with a micro-thin layer of lacquer made with Apollo’s secret formula. After undergoing a six-week drying and curing process, followed by another six weeks repeating the steps for side B, each blank disc comes out as smooth as a mirror. A box of 25 costs about $900.

“If you love a record, that’s the mold,” concludes Horowitz.

Blanks are only needed for new, previously unpressed albums. Reorders don’t require a new lacquer. Last year the top-selling vinyl LPs were catalog titles by Queen, the Beatles, Pink Floyd and Amy Winehouse, none of which required use of a blank.

Once a blank is on the cutting lathe and the studio tape is cued up, a mastering engineer employs an Apollo-made sapphire-tipped needle to cut a single long, intricate groove of sound waves onto the rotating disc. After a magical but boring process involving nickel-plating, reverse stampers and more, the microscopic spiral carved into the lacquer is pressed onto 12-inch albums.

More than a week after flames consumed the 35,000-square-foot building at 101 W. Lincoln St., pressing plants and mastering engineers are assessing the future. Some have expressed fear that the fire will disrupt the global production of new album releases and slow the seemingly endless supply of reissues that major labels churn out. 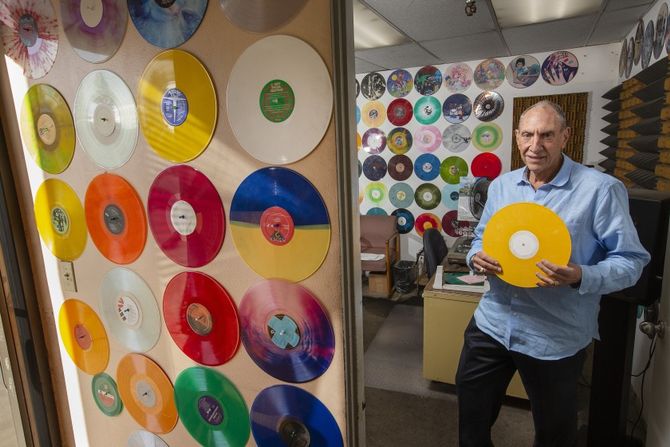 Steve Sheldon, the owner of Rainbo Records in Canoga Park, inside the record-themed sound test room. The 80-year-old company is shutting down.

It has already been a rough 2020 for the California vinyl industry. Last month Rainbo Records, which had pressed records in Southern California for 80 years, was forced to close after its landlord raised the rent.

The block housing Apollo is still closed to traffic. The cause of the fire remains under investigation, according to Fernando Herrera, Banning Fire Dept. public information officer. Herrera says that Banning officials have told Apollo that it won’t be permitted to rebuild until the property has undergone hazardous waste remediation. Given the chemicals used to produce the lacquer, it’s not clear whether current California environmental laws would even permit the company to rebuild.

RTI plant manager Hashimoto says that even before the fire, Apollo had been addressing manufacturing problems. “The last year or so they’ve been having some production issues,” he says, adding that “their quality has dipped a little bit, but people were still using them.”

In the short term, consumers and labels will be OK, he says. Lacquers needed in advance of April’s annual Record Store Day marketing initiative have already been cut and sent to pressing plants. Many of the established companies and mastering engineers buy their lacquer stock annually and have backups warehoused.

The concern is that a shortage will threaten new releases and boutique reissues in 2021 and beyond, after the stock has been depleted. At that point, Hashimoto says, “It’s going to affect the whole industry until somebody comes up with an alternative.”

Liz Dunster, president and owner of Buena Park-based Erika Records, the West Coast’s largest vinyl pressing plant, is one of the lucky ones. The fire won’t affect her production schedule, even if it “is just devastating” for the community. “My heart’s broken for what’s happened to Apollo,” she says.

Erika, which will celebrate its 40th anniversary next year, sources its supply from both Apollo and MDC, and has enough lacquers to last a year. Dunster estimates that her company uses between 100 to 125 a month.

Hardest hit will be independent labels that issue new releases by contemporary acts and earn more from vinyl sales than they do from streaming services. Hashimoto says a shortage of lacquers will drive up prices, which will no doubt be passed on to buyers already spending upwards of $20 for a new record.

Still, Horowitz says that the greatest loss rests in the institutional knowledge that has driven Apollo’s business. “The skill level of the people who were in that place? We have to keep in touch with them, because no matter what happens, putting this back together requires their exact knowledge.”