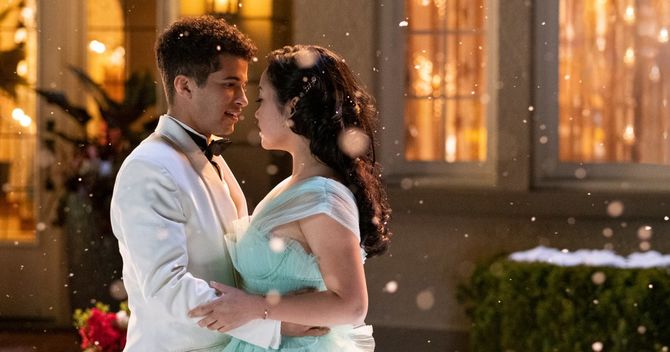 When Lana Condor found out that a new suitor would be complicating the love life of her “To All the Boys I’ve Loved Before” heroine Lara Jean Song Covey, she texted YA author Jenny Han, on whose books the Netflix films are based: “Why would you do this to me?”

Lara Jean had already sorted through a confusing tangle of emotions in the first film, based on Han’s 2014 bestseller, in which the teenage heroine finds that private love letters have been sent out to five of her old crushes.

One of them, gregarious jock Peter Kavinsky (Noah Centineo), hatches a plan to pose as a pretend couple that ends up with them — spoiler alert for anyone who’s never seen a rom-com — falling in love for real.

But in “To All the Boys: P.S. I Still Love You,” the second of three films based on the books, things get more complicated as Lara Jean navigates her first relationship. Then the final recipient of her letters enters the picture: John Ambrose McClaren, the sensitive and erudite boy of her dreams — at least, on paper.

Lana Condor plays Lara Jean Song Covey in Netflix’s “To All The Boys I’ve Loved Before” and “To All The Boys: P.S. I Still Love You,” based on Jenny Han’s bestselling YA novels.

(Béatrice de Géa / For The Times)

“The question ‘What team are you on?’ keeps me up at night because I don’t know from one day to another,” said Condor during a recent stop in Los Angeles, where billboards not far away towered high above Sunset Boulevard, playing up the #TeamPeter vs. #TeamJohn dilemma.

During the casting process on the first film, she said, she knew instantly that they’d found their Peter Kavinsky when she read with Centineo. (Their on-screen spark turned both actors into social media superstars overnight.)

The same thing happened after an exhaustive search for their John Ambrose when Jordan Fisher, who’s currently starring on Broadway in “Dear Evan Hansen,” came in for a chemistry read.

The character was briefly portrayed by actor Jordan Burtchett in a credits sequence cameo in the first film. But in “P.S. I Still Love You,” directed by Michael Fimognari, it would be a pivotal central role.

The filmmakers recast John Ambrose with the multiethnic Fisher, an actor and singer whose credits include “The Secret Life of the American Teenager,” “Dancing With the Stars,” “Grease Live!” and 2019’s “Rent: Live.”

In many ways John Ambrose is not a typical teen movie love interest, said Fisher. “He’s sophisticated and intentional, super kind, and warm and thoughtful — and a person of color.”

Through all of her relationships, romantic and otherwise, Lara Jean learns to listen to herself, not to the idealized fantasies in her head drawn from romance novels and movies. “The whole reason I wrote [‘P.S. I Still Love You’] was for the character of John Ambrose McLaren,” said Han.

Their dynamic brings a flush of confusion to Lara Jean’s young life, but it also forces her to figure out what she really wants.

“When Lara Jean and John Ambrose are together there’s more movement, it’s more colorful,” Condor said. “She was a little bit freer. When it’s with Peter it’s really intimate and quiet because that’s where you see the beauty of their relationship.”

The question ‘What team are you on?’ keeps me up at night.

“To All the Boys” readers might be surprised by how the movie version of John Ambrose deviates from the novel. His ties to Stormy (Holland Taylor), the retirement-home mentor who gives Lara Jean love advice, for example, are absent in the script by Sofia Alvarez and J. Mills Goodloe.

“I wanted the spirit of Lara Jean’s experience to stay true,” said Han. “As an author I genuinely feel it’s two different mediums and I understand that things change from book to screen. As long as the feeling was the same, the heart, that’s what I wanted. And I think that’s true.”

A third film based on Han’s trilogy-capper, “Always and Forever, Lara Jean,” was filmed back to back with the second installment and will see Lara Jean wrestling with her post-high school future. To Han, the character’s journey is about more than just the fantasy, which is why she threw the John Ambrose wrench into Lara Jean’s life.

“For me it represents how so much of life is about timing and proximity,” said Han. “He is the ‘what if?’ If he’d never moved away back in middle school they probably would have found each other, and it wouldn’t be her and Peter. The way that life can end up, you never know what can happen. There are so many different ways your life can go the right way.”

Fisher agreed. And he knows “To All the Boys” fans will have feelings about who wins Lara Jean’s heart.

“Timing is everything, and that’s one thing I hope that the audience takes away from this,” he said. “We are 99.9% of the time out of control of time, and that’s OK. It’s OK for us to submit to timing and recognize that we can’t fully control it,” he said.

The popularity of the franchise has inadvertently made Han and Condor feel like life coaches to some fans, but they both stress that they don’t necessarily have the right answers.

“People think I’m a love expert or a relationship guru because of these movies and books,” said Condor. “People think I have all the love answers. I try to help them out but I’m like, I don’t know. This is a big responsibility!”

“I just want everyone to be safe, especially with young people,” Han said. The takeaway? Don’t think of it as a matter of #TeamPeter or #TeamJohn — but #TeamLaraJean.

“A lot of questions come up like, ‘How do I break up with my boyfriend?’ and I’m like, I don’t know! I need context!” said Condor with a smile. “Make good choices, everyone.”