Thursday night, the Weimar gloves finally came off at Walt Disney Concert Hall. It was not a pretty sight or sound or sentiment. It wasn’t meant to be.

Esa-Pekka Salonen began his Los Angeles Philharmonic Weimar Republic project last week by revealing how Paul Hindemith and Kurt Weill, in their very different ways, sought order out of the chaos in Germany a century ago. Bach and counterpoint served as hoped-for foundation for a society dangerously in turmoil.

In “Weimar Nightfall” on Thursday — employing a host of singers, actors and dancers, as well as the Los Angeles Master Chorale — Salonen this time took on the turmoil. Staged by Simon McBurney and brother Gerard McBurney, “Weimar Nightfall” followed a 14-year path of outrageousness, outrage and just plain rage.

Performed against a backdrop by Anna Fleischle that toughened the warmth of the Disney Hall interior with what looked like large concrete shards, Hindemith’s one-act 1919 operatic shocker, “Murderer, Hope of Women,” came first. Enough had changed nine years later that Weill set his “Berlin Requiem” to unsparingly hopeless poems of Brecht. Finally, fleeing doomed Berlin in 1933, “The Seven Deadly Sins” was Brecht’s and Weill’s reckoning of the world’s social ills.

The sex in “Murder” is graphic, sadistic, orgasmic and most of all desperate. No, most of all, violent. The 23-year-old composer was simultaneously traumatized by his wartime experiences and exhilarated by his extraordinarily heady times when getting away with anything seemed not just possible but necessary. He also had a headful of Wagner and of his flamboyantly lofty and raunchy librettist, the Expressionist artist Oskar Kokoschka.

The score is grandly scaled for a large orchestra that regularly erupts into dark ecstasies — oh, those tubas and other brazen deep brass. The staging here was minimal, but once soprano Madeleine Bradbury Rance and baritone Christopher Purves had taken off their shoes, you knew there would be no stopping two arrestingly raw singers, egged on by the spectacular performance from Salonen and the L.A. Phil, with the three warriors and three maidens serving as witness to the appalling spectacle. 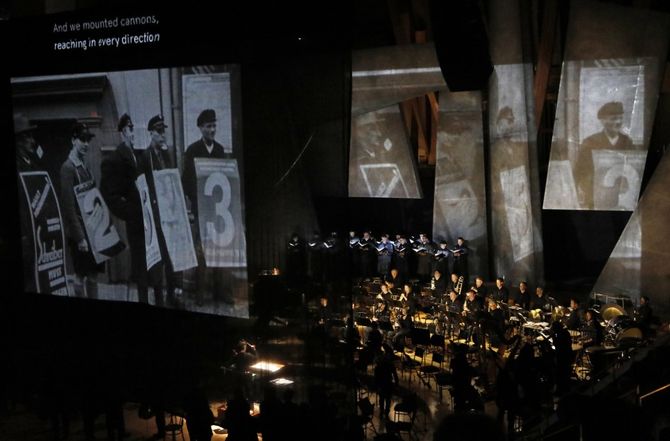 There is more murder in “Berlin Requiem,” a cantata-like setting of Brecht poems in response to the 10th anniversary of the end of the First World War and to the killing of the revolutionary socialist Rosa Luxemburg. “Worship the night,” the Requiem begins and ends, “and you may calmly expire.”

The staging here was dominated by video imagery of Weimar streets and countryside. In the Brecht poem “Legend of the Unknown Soldier Beneath the Triumphal Arch,” the view was of Nazis at the Brandenburg Gate. Dominating too were compelling performances by Purves, tenor Peter Hoare and Salonen, whose incisive conducting left no place to hide the horror of it all. 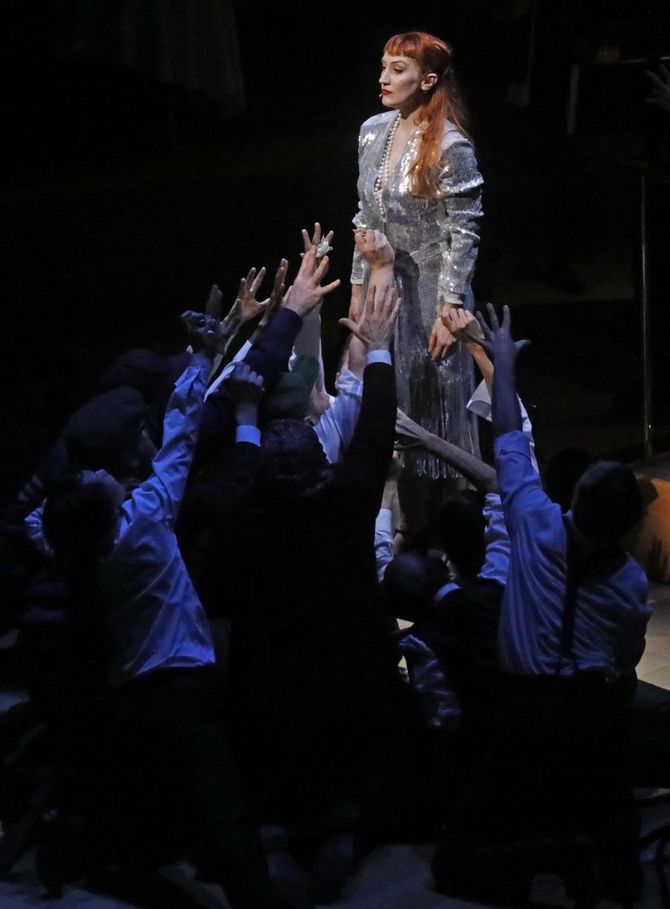 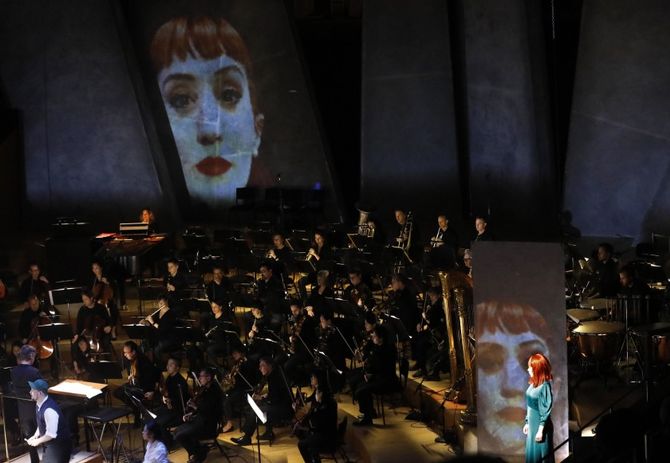 There is more wit, however biting, in the better known “Seven Deadly Sins,” the final collaboration between Weill and Brecht before their falling out, with Brecht turning to the more politically uncompromising Hanns Eisler. Written as a ballet for a singer and dancer, the sisters Anna I and her alter ego, Anna II. They leave their home in Louisiana to make their fortune, traveling to seven cities, one for each sin. Anna II is a hustler, cabaret dancer, Hollywood extra, film star, femme fatale who winds up homeless in San Francisco (how little has changed), where she overcomes envy and finds, after seven years of selling herself, a possible glimmer of inner pride.

Nora Fischer’s strikingly glamorous Anna I made her a savvy, cynical modern woman coping in a man’s world. She is a soprano who employs little vibrato, has a huge supply of tone color and a taut delivery that makes every word not only intelligible but indispensable. As Anna II, dancer Gabriella Schmidt was just the opposite, a wallflower who blooms into a sexy and irrepressible customer for every sin.

The McBurneys here did much to vivify the drama, sometimes vaguely, sometimes, as in a Los Angeles film scene, overly specific. The family back in Louisiana, a quartet of male singers amplified with actors, appeared more like Lower East Side émigrés than Southerners. Then again, what did Brecht and Weill know about Louisiana?

Mainly, though, Fischer and Schmidt were perfect models of the Anna I-Anna II dichotomy that symbolized the Weimar Republic as era of dichotomies, be they the volatile cocktails of sex and violence, liberation and oppression, populism and desperation or the rise of runaway capitalism and the rise of runaway fascism.

Hindemith and Weill were on the case. Their quest to find order in this, as it was with many other artists of the period, underpinned the greatness of their art. But order itself proved a bitter dichotomy. At the other extreme from Bach, a fraught public in 1933 elected Hitler as a chancellor who promised to restore order.

In his two concerts, Salonen could only scratch the surface of the Weimar Republic, but he made it bleed. And the L.A. Phil made it matter. 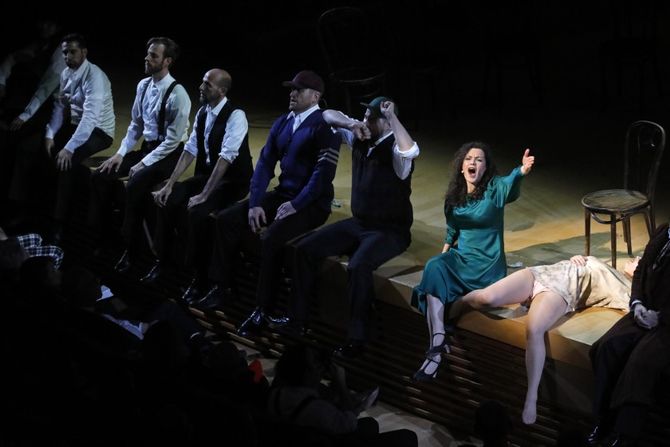 « Previous Review: Frieze? Please. Try the upstart Felix art fair at the Hollywood Roosevelt
Next » How a fire in the Inland Empire could spell doom for the worldwide vinyl LP boom