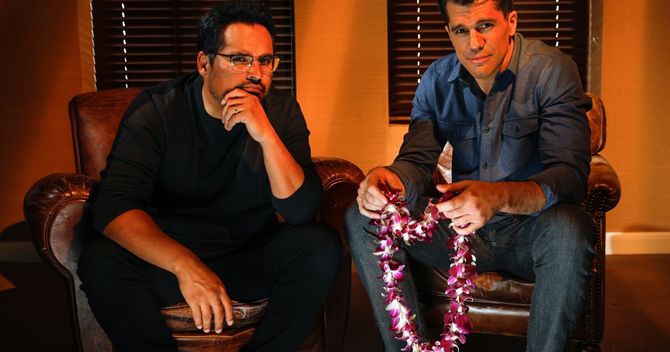 Sooner or later, everything old is new again. Especially when you’re in Hollywood.

Across television and film, remakes, reboots and revivals have dominated popular culture over the last decade, most noticeably across the horror genre. The latest reimagining (but surely not the last) is Blumhouse’s “Fantasy Island,” a PG-13 thriller that transforms the comparatively tame ’70s series into an ensemble horror movie.

Written, directed and produced by Jeff Wadlow (“Truth or Dare”) alongside co-screenwriters Chris Roach and Jillian Jacobs, the film, which hits theaters Friday, is Blumhouse’s most recent effort at flipping previously loved characters and IP to box office dividends. (It will attempt to repeat the feat again with the release of Universal’s “Invisible Man” at the end of the month.)

“If the [script] is good and right, I think any time is a good time for a reboot,” said Jason Blum. “When I watched ‘Fantasy Island’ as a kid, I remember there being a really dark, creepy element to the show and I loved the idea of leaning into that and making a movie that emphasized just the scary part. It was lots of other things too.”

“A lot of people — I know I felt this way — have this idea of ‘Fantasy Island’ that’s a little silly,” said Roach. “Probably because it was on back to back with ‘Love Boat.’ But the truth is the show had a lot of very dark episodes. It was very ‘Twilight Zone’ in nature. And as the seasons went on, it dealt with a lot of subject matter that really lent itself to horror, so it seemed like a natural fit.”

The fantasy drama series ran on ABC from 1977 to 1984 and starred Ricardo Montalbán as the mysterious Mr. Roarke and Hervé Villechaize as his assistant, Tattoo.

“Ricardo Montalbán was one of the first Latin dudes on TV that I saw,” said Peña of the Mexico-born actor. “Before that we didn’t see a lot of Latinos in cinema [or on TV]. I mean, we still have a lot of work to do, to be honest. But I wanted to do the movie because he was such an icon. There was a certain charm to him that I didn’t want to emulate but I wanted to convey, and a lot of it had to do with the language.”

Each episode of the show followed the same format: “The plane arrives, the door opens, the guest gets out, the fantasy begins, gets twisted [and then] they learn a lesson,” said Wadlow.

“It has this incredible ‘be careful what you wish for’ notion embedded in the original material that, if you really analyze horror movies, is present in all the great ones,” he added. “It’s about wanting something and then being punished for wanting it. Whether it’s something as base as sex or drugs or as forbidden as love, there’s always a price that needs to be paid.” 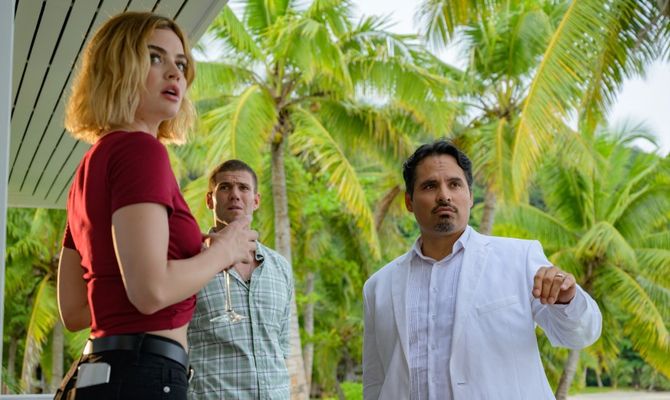 Although the character Tattoo is not featured in the film, the writers managed to sneak in other bits of fan service for those old enough to remember the original series.

“I think once people see the movie, it will become clear why we did some things regarding Tattoo,” said Roach. “We wanted this to stand on its own and even though it’s honoring the mythology of the show, it creates a new mythology.”

“I thought a lot about the Marvel movies,” said Wadlow. “What they do that is so incredible is they both honor the underlying material but also change it quite a bit. They identify the icons of the underlying material and that’s what they make sure is present in the film. So I looked at ‘Fantasy Island’ and I thought, what are those icons?”

They were determined to be: Roarke, his white suit, the arrival of the plane, Roarke’s command to his staff “Smiles everyone, smiles,” and of course Tattoo’s iconic catchphrase, “The plane! The plane!”

“I wanted to make sure that all of those things were present but then [we] started to riff and change things,” Wadlow said. “For example, in the show, the fantasies never crossed because it was designed to be cut down into 30-minute episodes to be sold overseas. When they get off the plane, you never see the two guests in the same shot. So I wanted to make sure we had four different fantasies that work as standalone stories before they crossed.”

Realizing the importance of Roarke to the success of the film, Peña was high on the director’s shortlist for the role thanks to his dynamism as an actor, Wadlow says.

“He both honored what Ricardo Montalbán did and also offered something new and contemporary, something that felt fresh,” he said. “He offered so many nuances that I could never have thought of on my own. For example, he’s in the white suit but the shirt’s untucked, there’s no tie, it’s a little bit more relaxed. And he’s doing the accent but it’s a little bit different.

“He becomes this sort of cipher because in the movie we don’t really know what Mr. Roarke’s deal is. He’s kind of this mysterious figure, this sort of sinister, ominous Willy Wonka. By the time we get towards the end of the movie, we’re not sure what his agenda is and Michael really [conveys] that. You don’t feel like you can get a read on him, which was really important for the character.”

“He can be very funny but also a good dramatic actor,” said Jacobs. “He brings a lot of fun and charisma to the role. Obviously Ricardo Montalbán was very charismatic and iconic — we wanted to try to get somebody who has that same thing but also slightly different.” 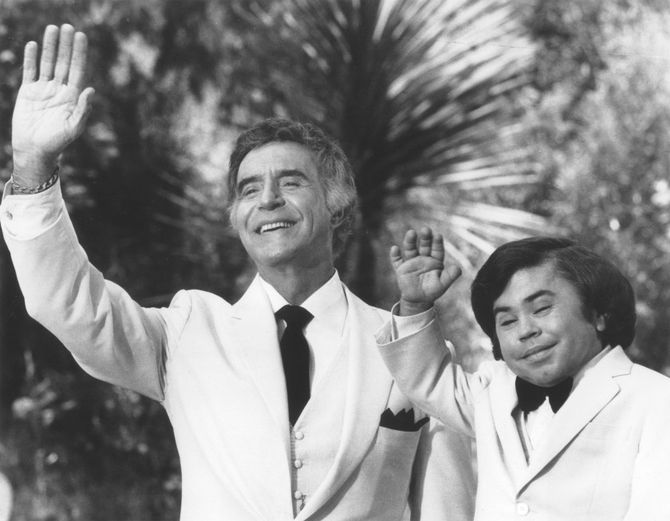 Hosts Ricardo Montalbán, left, and Hervé Villechaize, as the dashing Mr. Roarke and his trusted companion Tattoo, wave greetings to their guests on “Fantasy Island.”

The process of developing the film and procuring the rights happened pretty seamlessly, Wadlow says.

“I had an idea for a ‘Fantasy Island'-like project, Jason heard about it, went and got the rights, approached me and said: ‘I hear you have an idea. I have the rights. Why don’t we just do it?’” Wadlow said. “And I said, ‘Let’s go.’”

The director brought on his “Truth or Dare” screenwriters Roach and Jacobs, a husband-and-wife team, and approached the writing process like a TV writers’ room.

“We almost approach it like a multi-episode streaming series where each act is a different episode,” said Wadlow. “We do outlines like writers on TV and then we assign acts like they’re individual episodes. It’s been the most productive working relationship of my life.”

“We all sat together sort of like a think tank and talked about all the things we wanted to see in a ‘Fantasy Island’ movie,” said Roach. “What elements from the TV show we thought were important, what fantasies could be the most relatable. And then we would go through and try to outline the entire story. Once we all felt like we had an outline that was good and Blumhouse signed off, then the three of us would all write our own. We’d break it up, take different themes, swap and rewrite each other’s material.”

The writers considered every fantasy explored throughout the series’ seven-season run and began to list potential fantasies for the film.

“We always thought about the twist, how it could go wrong, how it could be perverted, how we could inject some mischief into it,” said Wadlow. “And we just came up with 10 or 12 that we liked, picked our four favorites and started to think about theme and character and how they could come together.”

“We very much structured [the movie] like an episode of the show,” said Jacobs. “They basically arrive on the island and then you’re jumping around between the fantasies. We wanted to keep that same appeal the show had.

“We definitely wanted to have a little bit of everything,” she added. “Some romance-type things, the superficial party fantasy. We wanted to try to make a few different movies in one movie.”

“I think the one that’s probably most different from the show is someone wanting revenge on a high school bully,” said Roach. “The one thing we tried to do was honor the show, but also since it’s 2020 try to think of a fantasy that felt relevant to our time.” 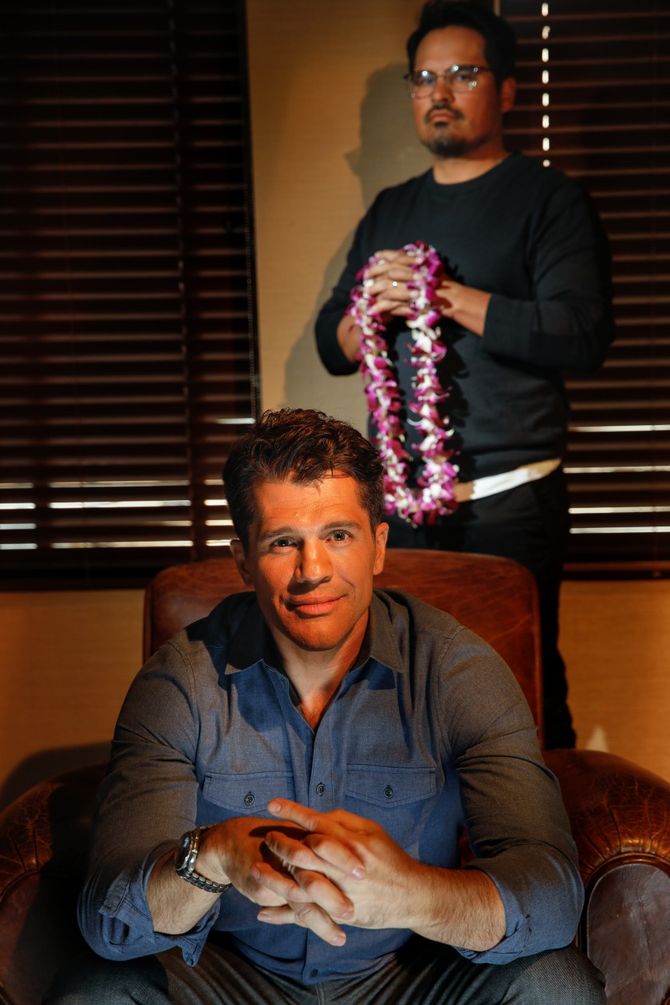 Michael Peña, background, portrays the host of the island, Mr. Roarke, who was originally played by Ricardo Montalbán in the ’70s TV show, with director Jeff Wadlow.

As Blumhouse continues to evolve, the company that made its name on truly chilling horror films including “Paranormal Activity,” “Insidious” and “Sinister” has opened up its offerings to social satires like “Get Out,” prestige drama like “BlacKkKlansman” and “Whiplash,” and psychological thrillers like “Fantasy Island.”

“I think the best horror movies focus on story and character,” said Wadlow. “I just enjoy scary movies, and I try to allow the fear to come from a place of story and character. And ultimately, if it makes a movie feel more like a thriller I’m OK with that. I think you should be focusing on those two elements and not just scares for scares’ sake.”

“We definitely had early drafts that had more horror elements,” said Roach. “But then it started to feel like we were just throwing it in just to have it in. I think one way we thought about it was kind of like ‘Jurassic Park.’ You come into this park and you’re like, ‘Wow, they brought back dinosaurs. This is the greatest thing ever.’ And then of course the dinosaurs get loose and start eating people. We wanted it to feel in the beginning like this is the coolest thing ever: You’re coming to this island that could make anything you want come true. And then it slowly unravels.”

Following the traditionally thrifty Blumhouse model, the film was shot with a reported $7-million budget, which presented its own unique challenges.

“To Jeff’s credit, he does a lot with the budget,” said Roach. “We think it feels like a much bigger movie.”

“And we definitely didn’t ever want to limit ourselves in writing,” said Jacobs. “He’s always of the mind that he’ll make it happen.”

“Which he does,” said Roach. “But obviously we didn’t go as wild as I’m sure our imaginations could take us.”

Shooting in Fiji offset some of the biggest financial challenges, Wadlow says. “It was just so beautiful so we didn’t need a lot of money for set or CG. I just turned the camera on and we’re in Fiji. You don’t need anything else.”

“It’s low-budget so it was like, no trailers,” he said. “I couldn’t get used to that, to be honest with you. If we do another one I was like, ‘You’ve got to give us a trailer, bro.’”

« Previous First U.S. FAA-approved 'beyond-line-of-sight' drone flight completed
Next » Hopper is back in Netflix's 'Stranger Things' Season 4 teaser. This is not a drill